This weekend the situation in Indonesia has escalated. It shouldn’t have come to this, and yet here we are. Networks and timelines are filled with expressions of horror and sadness that the executions are going ahead. Families and loved ones are racing to get there in time; governments all over the world are appealing and protesting. The lawyers are giving last minute radio interviews, exhausted. A consignment of plastic chairs being ferried to the prison is photographed and worried over. Who are these chairs for?

Those who are still cheering on the executions as Indonesia’s decisive move in the war on regional drug distribution have a real problem in Mary Jane Veloso. Mary Jane is a 30 year old single mother, and her sons are just 6 and 12. Her own account of the events that led to her arrest has been published unedited online. In 2010, she left her children at home with her parents in their village, and travelled to Malaysia because she was promised domestic work that would enable her to provide for her family. There, someone she trusted gave her an air ticket and a brand new suitcase for a week’s holiday in Indonesia before her work started.

“We were so poor,” Ms. Veloso’s older sister, Marites Laurente, recalled of their time growing up. “We were just picking up bottles and plastic in the road to sell to make money.”

The suitcase contained 2.6 kilograms of heroin concealed in the lining. At her trial she was assisted by a student translator who didn’t speak much En 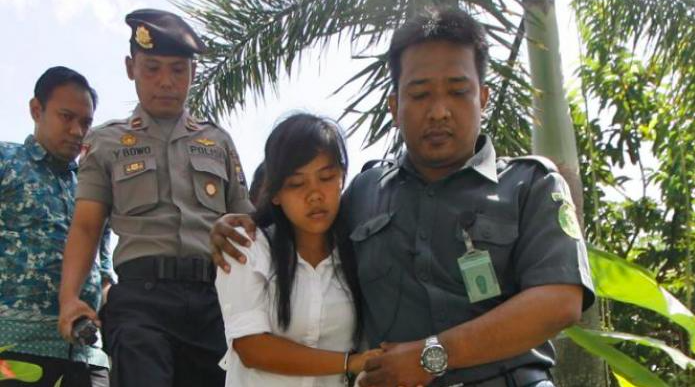 glish, and she didn’t either. There is a last minute worldwide social media campaign underway to try to save her.* As the stories of the others scheduled to be killed on Tuesday with her make clear, drug transportation is a business that’s managed as much by improvisation as organisation. People end up in the wrong place at the wrong time, having a go at making something better.  Read this:

Jamiu Owolabi Abashin was living on the streets of Bangkok in 1998 when a fellow African living there took pity on him and brought him home. Shortly thereafter, according to Mr. Abashin, his new friend asked whether he wanted a quick-paying job, in which he would get $400 for bringing a package of clothing to the friend’s wife in Surabaya, Indonesia, where she sold used shirts and pants.

But what do these stories have to do with us as educators, if we’re not legal experts, or researchers in drug policy? What should be our investment in this, if we’re not family or friends? What if our attention is just a variant on the prurient fixation with moment-of-death videos that Jade Davis calls out in her excellent piece on the street killing of black men in the US? As she says, it’s increasingly effective in prosecution that bystanders had the courage and presence of mind to record what they could see, but this is also the decision that puts the very moment of dying on the nightly news and all over the web, where their mothers and children can’t possibly turn away in time.

I have no idea how long it took for the announcement that the police officer who shot and killed Walter Scott would be charged with murder to make it to social media. What I do know is that I learned about it on social media, which is when I also learned what Walter Scott looked like as his feet hit the ground those last few times. I know exactly what his last step looked like.

That was when I closed my browser and walked away, because I couldn’t take seeing the rest over and over again.

Some of the same dilemma plays out here. How much do we need to know about the way Indonesia manages the business of execution, given that our knowing it inevitably exposes their mothers and sisters and their children to these details? There’s no respite from it: we have eye witness accounts, and stories from those who have participated, and the newspaper articles have illustrations, and the stories have details, and if I was their mother you couldn’t burn that stuff fast enough for me.

French philosopher Michel de Certeau, who died of cancer in 1986, wrote about the problem we have with the management of imminent dying. It is because we can’t accept our own mortality, he writes, that we put the dying away, out of sight. Literally, we make the dying person into something ob-scene: off the scene, can’t be seen. Humane killing is carried out at midnight, with only the minimum number of legally required witnesses. (Who are those chairs for?)  What he calls “the immoral secret of death” is written back in, “in all the procedures that quarantine death or drive it beyond the limits of the city, outside of time, work, and language, in order to protect a place.”

But deCerteau’s point is more complicated than this. It’s not because we close the browser and walk away, but precisely because we hold in our minds the details of someone’s dying, whether that someone is ill or is waiting in a cell or is right in the moment of being shot in a park, that we’re keeping their death in a place that is separate from our own. “I am participating in the illusion that localises death elsewhere, in the hospital or in the last moments: … by identifying this image with the dying person, I make it the place where I am not. Through the representation I exorcise death, which is shut up next door, relegated to a moment that I assume is not mine.”

For deCerteau all this is confounded in the end by the practice of writing. Writing itself invites death right back into the room because we write in anticipation of being read, later. Writing only exists because of what has been written—the traces and after effects of the moment of writing itself, which is more or less nothing in the scheme of things. And it’s through writing that we resolve the trick of locating death elsewhere, by producing it right out of ourselves, out of the mental calculation and physical gesture of putting words together. Look, we say, as the sentences appear, here I am in the very moment of living my life, and that moment has always immediately passed. Here is my dying, and now it’s bound up with yours, because this is the condition that we share.

So if “death is the necessary condition of evolution”, as deCerteau points out, and “the law of the species is that individuals must lose their place”, then why care so much about those who are leaving us? Why are so many taking to the streets and calling radio shows and expressing their anticipatory grieving online as we wait through these terrible two days?

Firstly, it’s because dying is the most precious thing that we do, the most important and generative capacity that we share, and it’s the one thing that should restrain our chasing of productivity, status and stuff. We need to learn to live with it better, for sure, but we don’t do this by letting it become a bargaining chip in a political war on this or that. And secondly, dying entangles us intensely with the lives of others; we are all woven together and one life can’t be neatly picked out without severe, sometimes not-survivable, damage all around it. This violent and premedidated bereavement, including of children, can’t be made civilised, no matter how many forms are signed.

The stories from all those waiting to be executed on Tuesday tell us that this world isn’t a safe place for most of the people in it. The least we can ask is that the state recognises this simple thing: dying belongs to the individual, and is the most fundamental human capacity that the state is there to protect.

There is still time to speak

Please read this article and take a moment to sign this petition to appeal for clemency for Mary Jane Veloso. The Mercy Campaign petition for Andrew Chan and Myuran Sukumaran is here. What difference will it make? Maybe nothing in relation to the outcome, but maybe also something really critical for those who love them. It’s all we can do, and it’s not nothing.

This post owes a lot to others who have helped me think about an educator’s place in relation to death and dying, but especially to Paul Prinsloo, Bon Stewart, Melonie Fullick, Jesse Stommel, Jade Davis, Frances Bell, Anna Notaro, Audrey Watters, Rachel Duke and Tressie McMillan Cottom. And there is nothing adequate at all that can be said to those who love Myuran Sukumaran, Andrew Chan and Mary Jane Veloso and the others on death row tonight, except that our heartsick thoughts are with you all.