January 28th, 1986 the Challenger Space Shuttle finally took off after many delays and concerns about safety. The parents of female astronaut Christa McAuliffe were watching from the stands, news cameras trained on their upturned faces as the shuttle exploded. 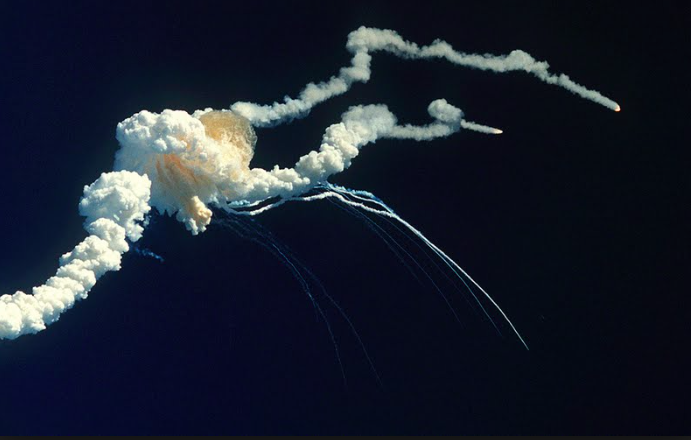 “Etched forever” is a meticulously pieced together account of the reactions of all those who prepared for the launch and then witnessed the explosion, from the NASA ground support to the families to the President to all the bystanders. So many stories woven together by a technical malfunction with its own story, that had been assembling itself over time while all the human stories came together.

“If you don’t have to ask it,
Fine, but I have to ask it.
If I were her mother or husband, I would
Have to go through the center of it.
What happened to her? As long as it was she,
what did she see? Strapped in,
tilted back, so her back was toward
the planet she was leaving, feeling the Gs
press her with their enormous palm, did she
weep with excitement in the roar, and in
the the curve of her tear did she see for an instant
the first blush of fire?? If she were my daughter,
I’d want to know how she died–was she
torn apart, was she burned–the way
I wonder about the first seconds
of our girl’s life, when she was a cell
a cell had just entered, she hung in me
a ball of bright liquid, without nerves,
without eyes or memory, it was
she, I loved her. So I want to slow it
down, and take each millisecond
up, take her, at each point,
in my mind’s arms–the first brilliant
shock hit, as if God touched
her brain with a thumb and it went out, like a mercy killing,
and then, when it was not she,
the the fire came–the way we burned my father
when he had left himself. Then the massive bloom un-
buckled and jumped, she was vaporized back
down to the level of the cell. And the spirit–
I have never understood the spirit,
all I know is the shape it takes,
this wavering flame of flesh. Those
who know about the spirit may tell you
where she is, and why. What I want
to do is find each cell,
slip it out of the fishes’ mouths,
ash in the tree, soot in your eyes
where she enters our lives, I want to play it
backwards, burning jigsaw puzzle
of flesh suck in its million stars
to meet, in the sky, boiling metal
fly back
together, and cool.
Pull that rocket
back down
surely to earth, open the hatch
and draw them out like fresh puppies,
sort them out, family by family, go
away, disperse, do not meet here.”

Michel de Certeau concludes his chapter on the paradox of dying and writing like this:

To write, then, is to be forced to march through enemy territory, in the very area where loss prevails, beyond the protected domain that had been delimited by the act of localising death elsewhere. It is to produce sentences with the lexicon of the mortal, in proximity to and even within the space of death. … In this respect, the writer is also a dying man who is trying to speak. But in the death that his footsteps inscribe on a black (and not blank) page, he knows and he can express the desire that expects from the other the marvellous and ephemeral excess of surviving through an attention that it alters.”

This is from a three minute excerpt of a slightly longer documentary made with Myuran Sukumaran in conversation with educator Ivar Schou, in 2014

You think about all these tangents that your life could have gone on. And you think how could I have got there, how could I have got this, if I had done this differently, you know everybody does this when they’re sitting in their room with nothing to do for five years, you know you do a lot of thinking. … I accept what I did was wrong and I know that I should be punished for it but I do think the death penalty is excessive and I should be given a chance. I have demonstrated that I can do good and be good. I think I could do a lot of good in the outside if I ever did go free. It’s not like I’m just going to just go back after all this and just sit.”

Every day this week fresh, wet artworks have been ferried from Nusakambangan in the hands of Myuran Sukumaran’s family, frien 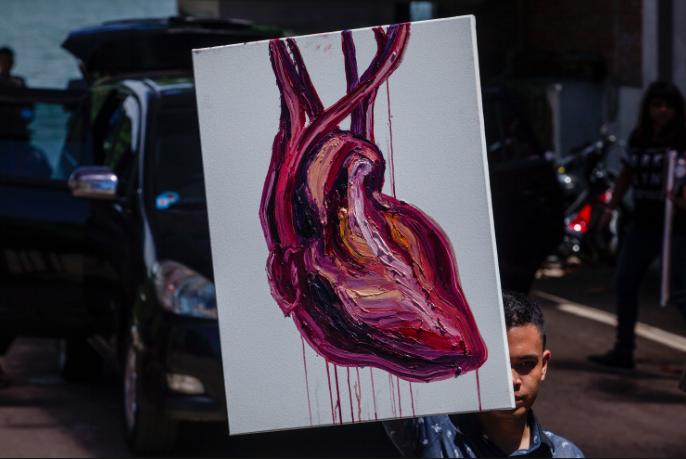 ds and lawyers. Along with other prisoners on death row, he refused to sign the papers for his own execution. Instead, he painted this picture, inscribed “Satu hati satu rasa didalam cinta – (one heart, one feeling in love)”, and the other prisoners signed it, including Mary Jane Veloso, who wrote “keep smiling”.

When the family representatives brought to the island as part of official proceedings heard the volley of gunshots just after midnight, no one had told Mary Jane Veloso’s sisters that she had been removed from the list. In the Phillipines, the woman who took her to Malaysia, and organised for her to be given a suitcase, has been found.

Mary Jane Veloso is still living, and will be returned to her original prison.

There are still over 40 prisoners sentenced to death execution for drug-related offences in Indonesia, including Mary Jane Veloso.

The Roy Morgan company has surveyed Australians every year since 2008 to discover which professions are held in the highest and lowest regard for ethics and honesty. We like nurses and, oddly, pharmacists. We really don’t like people who sell us things. University lecturers come in around the middle, with lawyers.

We hold journalists and television reporters low in our esteem; in 2014 they were ranked 18th out of 30, a consistent downward slide.

Australian journalists who worked this long, painful shift in Indonesia, living alongside the families of the prisoners in Cilacap’s hotel, deserve better. Their words have often been all we’ve had, and their exhaustion and trauma must be extraordinary.

And now, where do educators go with this? What do we do with what we learned about ourselves, our world, its rapidly changing media infrastructures and networks, and the thoughts of others around us? If our attention were to be truly altered, as de Certeau puts it, by all the words and paintings that this burning puzzle flung out—what would we see, what should we do?

Being an academic, Cancer, Health and healthcare Myuran Sukumaran

Tryin’ to keep the customer satisfied