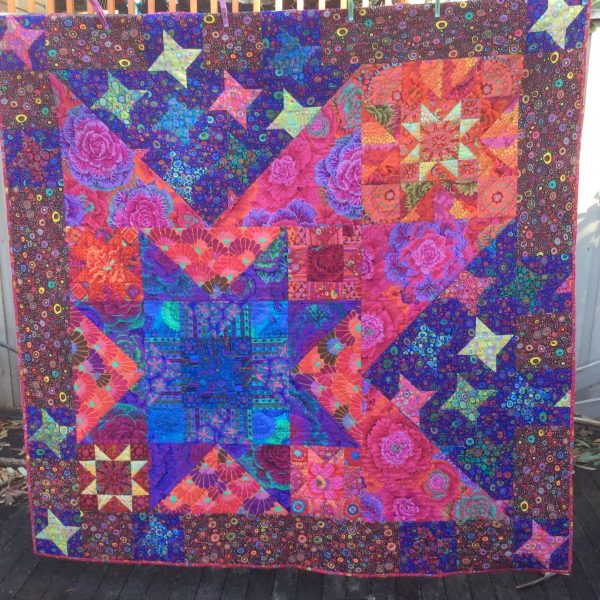 It isn’t like researching and writing so don’t think that I was physically working on it all that time, but thinking about it also occupied the sewing time. Also talking with fellow quilters to get problems solved quicker.

Rebecca Albury, email to me

I’m steering an underinsured rental car around a parked truck in a back alley in Dublin, and Bon Stewart is peering at two different digital maps, offering advice. Driving in new country is always like this: turns come upon you unexpectedly. It’s a hope and a prayer on most corners. “It’s OK,” we say to each other, as we have all the way from Galway’s one way streets to the Cliffs of Moher to Sligo to Dublin. “We’ll go around again.”

This is how I’ve learned and taught, my whole professional life. It’s how I learned as a child, it’s how I think my way now through strategy and governance. What is, is in motion. Systems are never fixed or final, even when they feel defeating and the walls close in. There is a space for you, or you can turn. We make the road by following our instincts, and by going around again.

I’m thinking about this learning by doing again as I’m reflecting on #OER19, what I learned about myself and the road I was on all along, without knowing. I followed the directions that others called out to me, and there was space for me.

Jim Luke has just written about why he feels so at home at this conference:

These are my people. I feel connection with them. The fact that they are often from the far corners of the earth just reinforces that feeling for me.  These people are trying to do what am I trying to do. They’re trying to make the world better, but not by planning and engineering some panacea or utopia. Rather they’re doing it the only way that really works: focus on education and learning, build human connections, build networks, keep a critical eye open, include everyone. It’s people before organizations. It’s ideas in service of people. It’s technology in service of people.

This was also my experience.

At the conference, I had the privilege of sharing images and the story of a quilt made by my friend, feminist activist and former Associate Dean of Education in our faculty, Rebecca Albury. I’ve stood in the presence of this beautiful quilt, Expanded Universe, and every time I look at it, a new detail shows up. How many stars do you see? More than you might notice at first.

For me, OER19 as a community and a conference was attuned to the politics of small details, of choosing what to notice and choosing what to think about. I’ve re-thought my reaction to the #shoetweets that anthropologist Donna Lanclos writes about. I have colleagues who think deeply about their shoes (you know who you are), but I just wear the exact same shoes every day, unless I change them for the same boots. Yet even with my limited footwear, I know about the breathtaking cost and social exclusion performed by shoes of all kinds. So I’ve wondered: what are people at education conferences doing tweeting pictures of these expensive shoes?

Here’s the thing. Re-reading Donna’s post on #shoetweets, I realise I’ve been focusing on the wrong thing. It’s not about the shoes, or what they cost, but about the way we choose to value human time that is spent in the presence of others. It’s whatever you notice, whatever you mark.

#Shoetweets can mark the moment when people, hitherto only known to each other via digital connections, became embodied to each other, became holistic people, and the pictures of their shoes together proves that physical co-presence to themselves and to others.

Donna Lanclos, ‘The Sociality of #shoetweet: On Latour-ing sandals and webinar boots‘

So this was also my experience.

OER19 as a whole was pieced together by Catherine Cronin, Laura Czerniewicz and Maren Deepwell. Catherine described this as the work of “many hands”, and we saw those hands at work. Martin Hawksey, more than assisted by wing-footed Harry Lamb with roving microphone, worked patiently to assemble the conference livestream and recording. Panel chairs managed time on everyone’s behalf without fuss. Participants brought their whole selves, listening, sitting on the floor, sharing scissors, asking good questions, sharing outwards to their networks, sketchnoting. Volunteer communities #femedtech and @vconnecting contributed planning, labour and time.

And so the Twitter timeline for #OER19 is really worth a browse, as it has been in previous years when that’s how I’ve participated in this conference by listening. It’s a timeline of many, many hands, most of whom will never meet; but notice that this digital human chain of appreciative curation is something we have quietly learned how to do.

I was there to talk about noticing the labour of educational crafting, not just the resources that are the result, or the audiences that they’re intended for. We are starting to see the stitches coming apart in education systems that have depended on the dark pact made between labour and love. Loving what you do is becoming toxic for individuals trying to piece together higher education careers, as they are shredded by precarity and overwork. The logical progression of this is that the system has self-infected and is itself now falling to bits. The damage caused by long-term neglect of how humans actually work can no longer be patched up.

Instead it’s time to ask what an ethic of care looks like in education-focused organisations, in resolutely practical ways. What would change about governance, HR, quality assurance, marketing, rankings, policy work and strategy if an ethic of care could be clearly articulated, that had respect for human dignity and sustainability at its heart?

As one of the event sponsors, Reclaim Hosting team were a warm, creative presence. Lauren Brumfield explained this to me: being at a conference is an intentionally community-facing practice for them, consistent with their vision for reclaimed digital identity for learners and institutions. Showing up, getting stuck in, asking questions, and sharing their work is a world away from the usual vendor self-trumpeting of “see you at Booth 203!” I also learned a tiny detail about their annual hosting renewal, which is opt-in rather than opt-out precisely because they have so many student blogger users, and they don’t want to accidentally roll them over because to a student, every dollar counts.

This really is something to notice: an ethic of care that shows up in the fine print when money is on the table.

So I’ve come away with a Reclaim Hosting t-shirt that I’m really proud to wear, and if you want to know anything at all about why this blog is hosted with them, just ask.

It’s become common to mention on a blog how long it might take to read. I think this is a considerate practice, but what it masks is how long it took to write.

If we are to try to repair the conditions that make open writing sustainable, we need to recognise that writing begins alone in the deep, extended labour of thinking time. But like Rebecca says, there is both thinking time and sewing time, and through all of it, there is the time of talking it over with others. From the moment the idea, or the problem, of writing is shared, writing is inherently for the social. It’s not about reputation, or citation, or status. It’s about the world we make, when we write together.

So this piece of writing is itself a little quilt, the prosocial work of many hands who contributed to my time at OER19. It’s a scrap of practice that makes sense through the labour of others who take time to read it, think about it, share it, ask questions of it, extend it.

If you want to read others, try the #OER19 timeline, or this conference page where some other posts are being kept. The time of joining others in reading what they have written is real work, so maybe make a cup of tea.

But if you have just one minute, “Women come together to stitch the soft-Irish border” is very lovely indeed, and says it all.

Thanks to everyone associated with #OER19.