What you cannot accept

So, how can we productively guard space upon terrain where agency is constantly affronted?

I pray you find the courage to show mercy, as one day you will no longer have the power and will be looking back at your choices and your mistakes and the decisions you have taken.

Over the last two weeks we’ve turned like sunflowers, all around the world, to face the extraordinary spectacle of the US political convention. Our own hustled yet protracted Australian Federal election seems so trivial compared to this fiesta of disruption, and even more so in relation to the knock-down roller derby that followed #Brexit in the UK. We changed almost nothing, and found nothing much to celebrate. Where were our balloons, our celebrities, our tears of pride? We had policy announcements in place of speeches, and so largely missed out on the moral purpose of being a nation in the first place. Americans seem to be able to go on for months and months in a glassy state of political devoteeism; after complaining that eight weeks is too long, Australians vote like bored shareholders at an AGM.

It’s a passionless, bureaucratic bit of box-ticking; but it’s also how incremental change works, as pollsters and policymakers get a fresh sense of the national mood and shift their plans according to what they think will fly. Thanks to this sharp piece of writing by Bon Stewart on why Debord’s Society of the Spectacle has something to offer us, I’ve gained a better understanding of how this driest of political processes actually works. Bon introduced me to the principle of the Overton Window (also called the “window of discourse”), concisely explained by Adam Lee at Big Think:

This is an idea first conceived by the political scientist (who else) Joseph Overton, which holds that, for any political issue, there’s a range of socially acceptable positions that’s narrower than the range of possible positions. Positions within the Overton window are seen as mainstream and uncontroversial, while those outside it are viewed as shocking, upsetting, and dangerously radical. The key point is that, with social pressure, the Overton window can shift over time, and today’s radicals may be tomorrow’s moderates.

Lee is interested in how the Overton window moves, and his conclusion is that it’s moved by people standing outside of the mainstream that it represents. This locates the struggle over what’s thinkable within practices of radicalism, and Lee identifies this willingness to do the work of shifting the window with acts of political courage. At some level this isn’t problematic, but I’m interested in the implication that those on the inside, those whose views are the Overton window, are just milling about like sheep waiting for a dog.

It’s easy to fall for this when faced with so much vision of actual crowds with placards, weeping, believing. The American convention crowd itself becomes the spectacle of global political power. But if we think that the only people who can shift the boundaries of socially acceptable thought are the people outside this crowd, we’re missing something. Like any peloton, the political crowd is an unfolding compromise: of individuals in relation to others, of synchronised manoeuvring around momentarily shared goals, of slogans that are troubled and settled again by individual beliefs, histories and hopes. Crowds fall apart, detour and regroup suddenly, with changed priorities and new directions. It happens all the time.

This isn’t always the work of outside agitation. There isn’t always a dog, or even a dog whistle. What looks like consensus about what’s socially acceptable can be held in place only by the slimmest of civilities, the most puzzling of inertias, even a misunderstanding. And so change becomes possible because as individuals—as ordinary faces in mainstream crowds—we’re called by a detail that troubles us, and we figure out how to make a small move. We can’t rely on anyone else to move with us. And sometimes the candidate you back is in the crowd right next to you, figuring out how to stand for herself, where to draw a line. 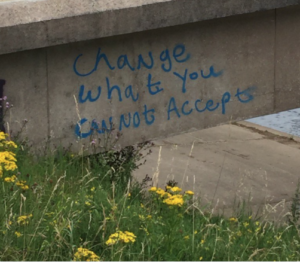 Both Sean Michael Morris and Bonnie Stewart are asking what it means to be educators in this world of flows. I was thinking about this when Mark Carrigan shared a beautiful photograph on Twitter. To put this message right here in this awkward place, someone clambered down this bank with a spray can, some anonymous fellow human for whom this message was urgent and with purpose. Mark photographed it and shared it. And I saw it, and here it is.

This is what it means to be part of a shared practice of learning together in this world. Individuals decide and act, in even tiny ways, and as we hear from each other, we adjust our sense of what’s to be done, what we can accept, and what we can’t.

The Indonesian government have issued the 72 hour warning to governments of the next group of individuals to be executed for drug crimes. Included in this group are prisoners who confessed under torture (including one who has had to be transferred from hospital by ambulance in order to be executed), prisoners who have had no or poor legal support, and Merry Utami, a woman whose story suggests strongly that she is a victim of deceit and coercion. Read about them here and here and here and here. 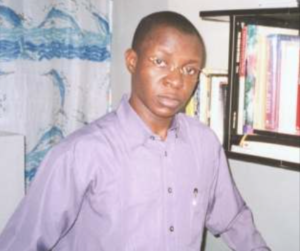 (There’s no good standard in any of this, but among the worst is the situation of Humphrey Jefferson “Jeff” Ejike Eleweke, a Nigerian youth pastor whose story of being set up is meticulously and authoritatively detailed here. Please don’t let him go without knowing why this has happened to him.)

After the serious diplomatic consequences of the last executions, the Indonesian government seems to be hoping for a lack of international media attention to the ending of these lives. They are avoiding the diplomatically sensitive French and UK prisoners, not to mention Filipina Mary Jane Veloso who is, incredibly, still on death row despite the strongest possible evidence that she had no idea what was in the suitcase she was asked to carry. The prisoners are Nigerian, Chinese, Pakistani, South African and Indonesian, and today they are facing the immediate and brutal ending of their lives, with everything this involves in relation to the fundamental human right to die well, the hope we all hold for ourselves.

We would rescue them if they were drowning.

And knowledge of their transfer to Nusakambangan has refreshed the terrible injuries done to the families and loved ones of Myuran Sukumaran and Andrew Chan in April last year. This is why the courage and conviction of Raji Sukumaran in writing directly to the President to appeal for clemency for these prisoners is as compelling to me as anything any political leader has said this week, on pretty much any subject.

Please don’t let those families go through what we have gone through. As a father and now a grandfather you would understand how much love you have for them, no matter their mistakes. You want to protect them but you feel so helpless. I hope you understand the desperation, anxiety, hurt and the burden you will inflict on to the families of the people you send to their death. … Please do not kill these men and women. They are someone’s son, daughter, father, mother, sister, brother, friend.

This is what Raji Sukumaran cannot accept, and I’m with her.

In our own hands