When a person dies, they leave behind, for those who knew them, an emptiness, a space: the space has contours and is different for each person mourned. This space with its contours is the person’s likeness and is what the artist searches for when making a living portrait. A likeness is something left behind invisibly.

John Berger,  ‘Steps Towards a Small Theory of the Visible’

It’s been hard to write, evidently. It’s March. This morning I was over on Plashing Vole’s blog reading this top quality piece about lefty academics (there’s no short version, just make a pot of tea and sit down, you’ll be glad) when I noticed from his sidebar of followed blogs that there hadn’t been so much as a chip wrapper blowing among these deckchairs the whole of this year.

Writing is slow, tricksy and always already falling behind. Why write, when you can shout? Why write, when the situation needs much more urgent action? Why write when the swamp of words is filling faster than we can bail it out? Placards, tweets, slogans: the US administration bellows #MAGA, and on Twitter—suddenly so America—the hashtags of the resistance come flying back. It’s like the worst Marco Polo ever.

And all of our efforts to grapple with what’s slithering about in this water with us have to be formed in actual words in our own mouths, in the languages we learned as children to talk about the world. Our mother tongues. Fake news, alternative facts: we’re trying to figure out what should be thinkable about any of this. Someone’s on television—surely we’d still call that “media”?— saying that the news is fake. Turn over the card. The statement on the other side is false. It’s like a drinking game. Something as intense, as intimate, as our own speaking is coopted to try to make sense of things that seem both obvious and entirely opaque, that reveal themselves only as we stare at them. What colour was that dress?

But the craft and practice of writing is more than an effort to try to get a hold of this, to nail it. It’s also a practice of grieving: the search for likeness, a feeling out and a pencilling in, it’s trying to represent and learn from the face of the thing that confronts you what it is that you have lost. Writing is the first attempt at getting it down on paper in a sketch, a snapshot, a sentence, because we’re all looking for someone who has died, some past self, who might not have existed, who might again.

And honestly there are days, even in this time, when it seems about right. But there are more days when your fingers are fused together and you bang at the keyboard with your fists and all you have is gestures and words that don’t sit right, that say nothing and convey nothing except how stupid this is making us all.

Back in January, knotted up and bad tempered with the effort of abandoned writing, I went to the Campbelltown Arts Centre to see ‘Another Day in Paradise’, the first exhibition of Myuran Sukumaran’s paintings, curated by his friend and teacher Ben Quilty. These paintings are at some level so familiar; we all saw them carried out of Nusakambangan still wet, still bleeding paint, still living.

Now here they are in a gallery on a hot day, with maybe ten or twelve of us walking around quietly looking at them. He painted his predicament relentlessly: the bullet, the scaffold, the AK-47, the politicians, the fellow prisoners, the body, and above all the face. He painted himself looking at the near future in which his paintings would immediately outlive him, because of the implacability of the judicial decision that his living had no value except in being kept alive to be brutally killed as an example to others.

Think about what it takes to keep trying to refine a practice of painting, writing, speaking, under that kind of duress. What are we doing letting the world silence us?

And now here we are, his paintings have done exactly as he intended and survived, cared for by his family and all those who loved him. And look: this likeness is not a photograph, this is an actual brushstroke in a self-portrait made by a person living under extraordinary pressure when he made it, and now he isn’t, and yet here we still are, and the marks made by his hands are still with us, as with any artist who has died.

Time bends around the then-and-now of all this. There are other pieces of writing on this blog about Myuran Sukumaran written at the time, and I still remember how it felt to lie awake thinking that if was me, if it was any of my kids in that kind of trouble, I would want the whole of Australia to stay awake all the time until my child was rescued.

Having sat with the paintings for a while, I came around a corner into a dark room and there was a large video installation by artist Matt Sleeth of a close up of Myuran’s face, blinking, not looking away, and laid in front of it a single bird of paradise stem. I thought the flower was part of the exhibition, but the next day I saw this:

Thanks to the person who left a flower for Myu in my video installation at #campbelltownartcentre – A beautiful gesture. pic.twitter.com/eM75KhvFEN

There are always personal reasons why it gets a bit hard to write. Family life presses in. Stuff happens. Health happens.

But I think I’ve also been silent because this blog lost a reader. One of the people who really anchored me in the world, who knew me well, and knew where I came from, who taught me how to prune a rose, love a succulent, be an unsentimental gardener, try hard to respect botanical names, drink sherry in good glasses, and remain vigilant to questions of justice without ever wanting to be known for it, has gone. At her memorial, this was said of her:

She was deeply affected by the injustices she felt were being suffered by the Palestinian people, and was continually inspired by their unfailing resilience in the face of them; and she would take part in pilgrimages that were designed, not to visit holy places, but to cement friendships with Palestinian families. This went along with a deep concern for other major ethical issues in public life, as when she went to Scotland to join a protest against the nuclear submarine base at Faslane. Not that she could often be induced to talk about these things. Her naturally self-deprecating manner always meant that if one heard about them at all they would be recounted as negligible contributions to widely accepted causes. There wasn’t the smallest hint of pride or self-advertisement. But this modest self-deprecation concealed a character of startling determination. 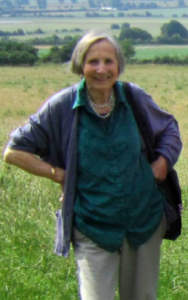 This character of startling determination was my cousin, my friend, my fellow cancer patient and chemo expert, someone I confided in and listened to and looked up to and learned from. I was enormously proud to know her and be loved by her. We went through thick and thin together in the last few years, and when I said goodbye to her, I finally found the proper words to part from someone you know you won’t see again, which is the hardest thing migrants need to learn. (Really, my last words to my mum were awful and don’t bear thinking about. Long story.)

So after a rainy afternoon sitting in her home making plans for her to seek hospice care (“I just want to be with other people who are dying, and I need to be able to talk about this,” she said) we stepped into the driveway and had to figure out how to honour everything we’d been talking about and yet find a way to say goodbye.

I miss her every day, especially when gardening and fuming at the world. She was 89. She had an iPad. She followed Palestinian bloggers and read Alan Bennett. We were John Berger fans together. She read this blog.

With love to you, M. You are still enhancing this life. It’s time to get back to it.

A couple of beers