In an interrogation, blows have only scant criminological significance. They are tacitly practiced and accepted, a normal measure employed against recalcitrant prisoners who are unwilling to confess.

The perverse bureaucracy of a well-mannered killing is cranking up so fast in Indonesia. Plastic chairs, fresh paint, name tags to sort out family members from spiritual advisers, coffins. Again.

Executions are scheduled for tonight.

Fourteen people, their families and loved ones are slowly sinking into this pit. They can’t save themselves from what is coming.

The Guardian has published a page from the journal of Nigerian youth pastor Humphrey Jefferson “Jeff” Ejike Eleweke, and although I’m not a person of faith, I just keep thinking: don’t we all have a version of this prayer, that we’ll be cared for, and not let go? 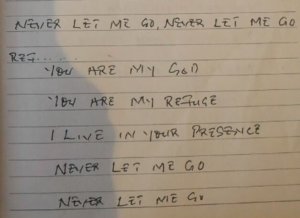 The stories of the other prisoners are here, and one detail quickly becomes relentless: “also beaten and tortured in custody”, “detained in his home for three days by officers who beat him until he signed a confession… later had surgery for stomach and kidney damage allegedly caused by the assaults”, “coerced into making the false admission”, “genitals were repeatedly electrocuted to elicit a confession under duress”.

In At the Mind’s Limits: Contemplations by a Survivor on Auschwitz and its Realities, Jean Amery describes the experience of being tortured as one of amazement, and the beginning of a permanent foreignness in the world. The tortured stay tortured, and can never return to a sense of safety, of being at home.

Amery’s torture “contained everything that we already ascertained earlier in regard to a beating by the police: the border violation of my self by the other, which can be neither neutralised by the expectation of help, not rectified through resistance.” And he is really candid about what happened next:

I talked. I accused myself of invented absurd political crimes, and even now I don’t know at all how they could have occurred to me, dangling bundle that I was.

This is why torture isn’t trusted to produce sound evidence. Its whole purpose is to destroy the coherent self, the self who can say anything true. The logic of torture is that a disciplined world must reject the humanist contract under which we take some responsibility for each other’s safety and care. Torture is implacable, and the destruction of the social is its mission. But the culture of torture then introduces its own destruction, because under torture, confession must become tactical, situational and entirely unreliable: “the nonsense I had foisted on them”, as Amery puts it.

Amery is really clear that secular torturing practice was not confined to the Nazis, even though he concluded that they had a special and pathological anticipation of the efficiencies they could create through the annihilation of hope. He doesn’t suggest either that we should see torture as an exceptional practice narrowly reserved for war or emergency. In fact, the bleakest conclusion from his essay is that torture is the tacitly admitted companion to incarceration in all circumstances.

Australian journalists Jewel Topsfield and Samantha Hawley are once more in amongst the families of the 14 victims in Cilacap, reporting with conviction and compassion in the worst circumstances. Julian McMahon, lawyer for Andrew Chan and Myuran Sukumaran and now President of Reprieve Australia, is arguing passionately for the principles of law and human rights that are harmed at every step of this process. The Chan and Sukumaran families are speaking up, appealing to the President with the particular authority he bestowed on them by executing their loved ones, to recognise execution as doing lifelong harm to others.

Earlier this year I was privileged to attend a family memorial for Myuran Sukumaran. Death penalty advocates—or even those who shrug and say that what’s happening in another country isn’t our business or is beyond our reach—should spend five minutes in the company of the families left behind. Because you really cannot argue either for the justice or the inevitability of state killing until you have faced what it does to others.

It’s not a national matter, it’s part of our world, and so it’s part of all of us. The principle of social hope which both torture and execution are designed to destroy is grounded in our capacity to value the lives of strangers, and not to let each other go.

In bad weather, only four of the fourteen prisoners were executed, for unclear reasons. This group included Humphrey Jefferson Ejike Eleweke. He was 43, and had maintained his innocence for 13 years, finally refusing to sign the document for his own execution on the grounds that he had not committed a crime.

The prisoners still living include Pakistani national Zulfikar Ali who also maintains his innocence, with strong evidence that he is right, including a statement from the person who testified against him that the testimony was coerced. Zulfikar Ali is the severely beaten prisoner who was transferred from hospital in order to be executed. What will happen to him now?

“We don’t know what will happen next because I was not allowed to meet with my husband. I hope he will be fine because I took all his clothes including his oxygen tank.”

Australia’s Jewel Topsfield reported throughout the night, and from the press conference, after which she said this:

Thanks all for being so understanding during a very chaotic, confusing & stormy night. My thoughts are with devastated loved ones. #RIP

In our own hands

What you cannot accept